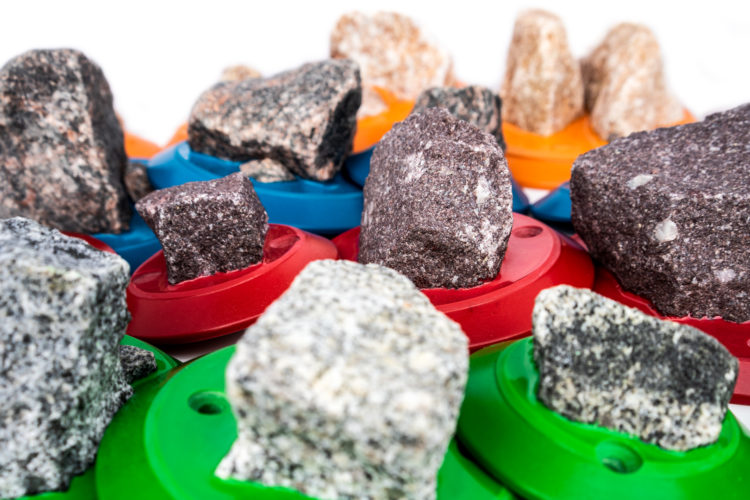 Rocks, rock fissures, cracks or huge overhangs confront every climber with individual athletic as well as enduring and mental challenges. But where can you find all climbers and boulderers when it’s snowing or raining? Of course, in a climbing gym for training. Yellow, red, orange and black holds cover the indoor walls of the climbing halls, some of which can be up to 20 meters high. A colorful range of climbing holds is attached to them. Most of them are made of epoxy resin or polyurethane (PU). Stoned-Holds is a young start-up that was founded by rock and nature lovers at the end of 2016 and is still one of the first companies in the world to produce and market climbing holds made of stone. The company offers eight attractive colors of the resin slabs and six different natural stones, including basalt, granite and sandstone – because a real rock feeling can only be provided by a real stone climbing holds.

Climbing holds made out of natural stone. Real stone climbing holds. Stone climbing holds. Stoned holds. Two or three other companies already had this idea. However, the stone has always been damaged, because former producers had to drill a hole in order to secure the stone hold to the wall. The company Stoned eliminated this small problem sovereignly, as the stone now sits in a fiber-reinforced support panel. In this construction, the natural climbing holds can comply with the EN standard for climbing holds and can therefore withstand tensile loads of up to 2.4 kilonewtons. Real “rock feeling” when climbing indoors – that’s what the founders of Stoned want to revolutionize. A rock imitation already feels frighteningly similar today. With conventional plastic climbing holds, the surface is treated with special sand to create a rough and micro porous surface.

Stoned is producing climbing holds made of stone in a small manufacture with love for climbing and a lot of heart and soul. They don’t need to treat the stone surface structure and the Stoned Holds do not degrade like other materials. “If used properly, the stone holds should easily last ten years or longer”, explains Andreas Krause, the founder of Stoned. However, there are still no long-term tests, which is why the company does not promote a long service life. In addition, the company offers to return broken or broken stone holds to be recycled and transformed into a new unique stone climbing hold. Stone lasts forever. In comparison to this: A conventional climbing hold made of synthetic resin lasts a maximum of three to four years if used regularly, for example in a climbing gym.

Stoned’s climbing holds offer professional climbers and boulderers a real feeling of solid rock under their fingers. This not only revolutionizes the professional climbing scene. Even beginners and new climbers can try their hand at easier routes with natural stone climbing holds, to be prepared for example when they climb on real rock for the first time. Climbing outside is very different from the usual setting in a climbing gym. However, sometimes rough conditions and rock-hard granite delight the heart of a real climber. As a company, Stoned wants to revolutionize the climbing scene with the innovative Stoned holds and the Holume, which was demonstrated for the first time in 2019.

This is a handhold volume made of self-healing plastic recyclate. The stone holds can be configured and ordered by private customers as well as operators of climbing gyms in our online shop. The user can choose between eight bright colors, three different levels of difficulty and six various types of rock. All of the stones, which later come under the fingers and soles of thousands of climbers, are bought by the company in the Bavarian Alps. This is where Stoned obtains its revolutionary grip system: broken granite, granite river pebble, broken basalt, Ruhpoldinger marble, conglomerate pebble or washed sandstone. Each type of stone has an individual look and feel and demands solid finger strength. The colorful small natural stone holds of the Stoned brand can be ideally combined with the holumes of Stoned. The self-healing properties of the holumes make it possible to have a smooth surface for years without even a small amount of abrasion. Together they result in an attractive hand-grip combination of robust stone climbing holds and optical eye-catchers – the new Holumes.

“Real. Rock. Feeling.” is the motto of the young start-up. The founders agree that they won’t remain the only ones and that they want anything but conventional climbing holds to be driven off the market. “It is more about a complementary factor in the specific training of each climber than about eliminating already proven training methods,” explains the Stoned team in an interview. The young founders are more interested in a training opportunity that comes closest to rock climbing itself. It remains to be seen whether climbing fans will be able to view the stone holds at official IFSC events, such as a World Cup, as they have already done at the qualification boulders of the 2018 German Championships.

We use cookies on our website to give you the most relevant experience by remembering your preferences and repeat visits. By clicking “Accept All”, you consent to the use of ALL the cookies. However, you may visit "Cookie Settings" to provide a controlled consent.
Cookie SettingsAccept All
Manage consent

This website uses cookies to improve your experience while you navigate through the website. Out of these cookies, the cookies that are categorized as necessary are stored on your browser as they are essential for the working of basic functionalities of the website. We also use third-party cookies that help us analyze and understand how you use this website. These cookies will be stored in your browser only with your consent. You also have the option to opt-out of these cookies. But opting out of some of these cookies may have an effect on your browsing experience.
Necessary Always Enabled
Necessary cookies are absolutely essential for the website to function properly. This category only includes cookies that ensures basic functionalities and security features of the website. These cookies do not store any personal information.
Non-necessary
Any cookies that may not be particularly necessary for the website to function and is used specifically to collect user personal data via analytics, ads, other embedded contents are termed as non-necessary cookies. It is mandatory to procure user consent prior to running these cookies on your website.
SAVE & ACCEPT